NMO is a Mousterian site located at the outlet of the Mahanayeem stream to the Jordan River, some 10 km north of the Sea of Galilee. The Jordan River at this vicinity cuts through sediments ranging in age from the Pliocene to the Holocene.

The three km strip along the banks of the Jordan River South of the Hula Valley is rich in archaeological sites including the famous Gesher Benot Ya´aqov Acheulian site and the crusader fortress of Vadim Yaqub. The NMO site was discovered during Jordan River drainage operations in the fall of 1999, and has been undergoing excavation since 2007 by a team from the Institute of Archaeology of the Hebrew University of Jerusalem and the Tel Hai Academic College. 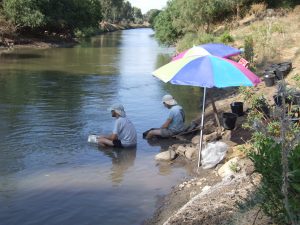 The site is open air, with the artifacts and animal bones found within black muddy silt, suggesting a lake shore environment at the time of occupation. The inhabitants of the area during the Middle Paleolithic produced Mousterian lithic tools including, primarily, points and blades. The site is dated to ca 65000 years BP based on OSL radiometric dates. Numerous animal bones in excellent preservation state were excavated. The dominant species is the giant wild cow, three times the size of present day cows. Other animal remains include deer, horse, wild boar, tortoise, birds and more. One of the most significant animal finds is the skull and femur of a lion found in-situ in the mud of the Jordan River Bank in 2002. Similar to other prehistoric sites in the region, the NMO sediments are waterlogged and hence preserve botanical material such as seeds, fruits, bark and wood. The site holds, therefore, great potential for the reconstruction of the environment of the region during the Middle Pleistocene. Finally, a human (non-Neanderthal) skull fragment was found in one of the piles of dirt dug up by a tractor during the 1999 drainage work. The confirmation of the presence of humans will contribute to the debate over the emergence of modern humans in the Levant and their migration routes out-of-Africa.